A regular direct shuttle coach service links Paris to Beauvais airport (BVA). Buses leave the airport 20 to 25 minutes after each flight arrival. For the return travellers need to get to the bus station 3 to 4 hours defore flight departure time.

Compare and book your airport shuttle & transfer service between Paris Beauvais airport and city center hotels, private homes or any other destinations including Disneyland, Versailles or another airport...

Where is located the airport coach station in Paris ?

Beauvais airport bus terminal station is located in the Pershing car park behind the congress & exhibition center just a stone's throw from the Concorde Lafayette Hotel. 5 minutes walk are necessary from any of the two subway stations - One on the Grande Armee Avenue leading to the Arch of Triumph and one at the opposite side on the Charles de Gaulle Avenue in Neuilly sur Seine. 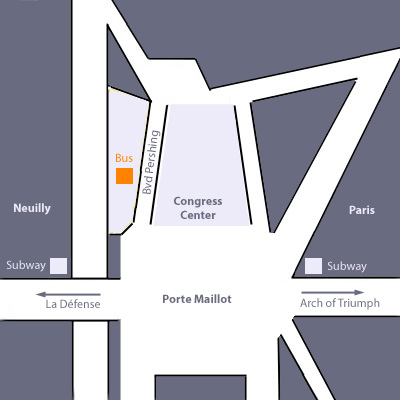 Airport bus service is the cheapest transport option between the airport and central Paris. Yet travellers have to get long in advance to the bus station, which is situated at the western limit of the city.

Porte Maillot is located in the very west of the city just between Paris and Neuilly sur Seine. This is a business district where you can find the Palais des Congres exhibition center.

Paris Beauvais airport (BVA) is located 85km in the north west of Paris. Bus & coach, shuttle, taxi, train, ... Travellers have plenty of choices to get to and from the airport.

Getting to/from the airport